Summary: Amon is the native ancient Egyptian (Kemetic) God of wind, fertility, life, and secrets. Amon was sometimes with Min to be the neteru Amun-Min.

(NOTE: In addition to native variations by locality or over time, there are often several possible transliterations into the Roman alphabet used for English.)

Amon: God of wind, fertility, and secrets. Husband of Mwt. Thousands of children, including Bast, Neith, Hapi, and Khons. Amon-Ra is an important combined deity (Amon and Ra). Amon is often shown with the large-curving horns of a ram unique to the Nile Valley or as the Sphinx.

Amun, Mwt, and Khonsu form the great triad of Thebes.

Amen-Ra was the deity of the ancient Egyptian Nome of Uast in Upper Egypt. The Capital was Uast (Thebes).

An example from the Leyden Papyrus of Qenna:

All the neteru are three: Amun, Re, and Ptah, who have no equals. He whose nature [literally “whose name”] is mysterious, being Amun; Ra is the head, Ptah the body. Their cities on earth, established forever are: Thebes, Heliopolis, and Memphis [stable] for eternity. When a message comes from heaven, it is heard at Heliopolis, it is repeated at Memphis to Ptah, and it is made into a letter written in the letters of Thoth [at Hermopolis] for the city of Amun [Thebes].

A prince of Byblos in the eleventh century B.C.E. told an Egyptian emissary:

All lands did Amun found, and he founded them only after he founded the land of Egypt whence you have come; but technical skill spread from there as far as [this] place where I am.

Ammon — The Egyptian Ram God. According to murals at the ancient temple of Luxor, this fertility god assumed the form of the reigning king in order to procreate, and divinify, the royal lineage. The transformation of horned beast to god reflects the animal’s crucial importance in Neolithic herdsman culture. The patron of Thebes, Ammon spoke through oracles and was equated by the Greeks with Zeus. In his name we find the universal sound (amen, amin, aum) whose utterance was holy. This Hellenized mask (c. 100 CE) hangs in the Vatican museum. —picture and text © 1996 JBL Statues (now called Sacred Source), original text created by Tom Laudeman

The cornucopia is a horn-shaped container overflowing with fruit, vegetables, and flowers. It is the symbol of fruitfulness, fertility, and plenty. It is from the horn of the goat Amalthaea, which suckled the infant Ammon-Zeus. 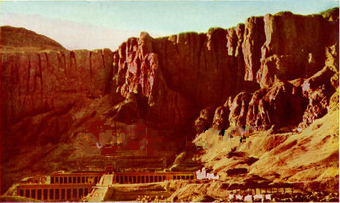 Get a beautiful certificate declaring that you are a priestess, priest, high priestess, high priest, hem, hemet, kher, sesh per ankh, scribe, witch, or shaman of Amon. This is a real religious certificate meeting government standards for conducting marriages and other ceremonies.

If you have an Ammon-related web page, please send the URL to Milo. Please indicate if there is a picture on your web page.

Contact Teen Witch at Milo, PO Box 1361, Tustin, California, USA, 92781 (please include a self-addressed stamped envelope for any reply). My computer is broken, so I can’t send or receive e-mail.

These web pages are about witchcraft. Attempting to be an amateur doctor is potentially dangerous to your health. These web pages are not professional medical and/or legal advice. Nothing on this website should be considered as a substitute or replacement for professional legal and/or medical advice. Persons should seek the advice of qualified health and/or legal providers.

Get a Pr Ntr Kmt certificate as proof that your religion is real and you are a real witch, shaman, priest, priestess, etc.

If you spot an error in fact, grammar, syntax, or spelling, or a broken link, or have additional information, commentary, or constructive criticism, please contact Milo the Witch at PO Box 1361, Tustin, California, USA, 92781.

May the Goddess grant YOU love, peace, joy, bounty, and wisdom.